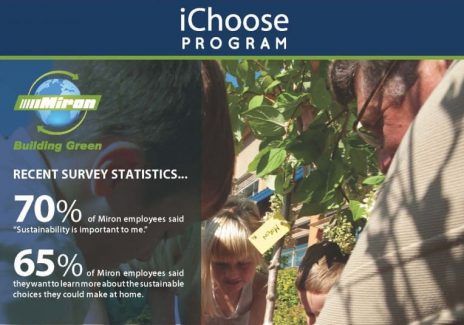 Miron Construction is used to doing big things. They build hospitals and schools and stadiums (Go Packers!)—projects that shape communities. It’s one of the reasons Cool Choices, a Wisconsin non-profit, approached the company to pilot an employee sustainability program. We were looking for a partner committed to sustainability, of course, but also to making a real impact on a very complicated issue. We got that and so much more.

Cool Choices assembled a team of opinion leaders from across the organization—project managers, estimators, site supervisors and executives—to set goals and map out an implementation strategy. Everyone had veto power, so each partner could ensure that the program stayed true to its mission and values. The Action Team, as we called it, poured over current research on how to motivate people to change behavior and dove deeper by looking at the specific opinions and practices of their colleagues. Our unique approach—a card game called iChoose—emerged around three bedrock objectives established by the Action Team:

So how would we get there? Our goals were straightforward but we needed to shape the program to be relevant within Miron’s culture.  After much discussion, the team identified a few defining features that any sustainability program should possess:

Games are only now becoming thought of as mainstream communication and mobilizing tools. The Miron Action Team was certainly cautious in pursuing this strategy for the company-wide employee sustainability program, but the advantages of a program wrapped in a game quickly became clear.

Games are fun and Miron’s game is inherently social. Players are either competing against or competing with colleagues. Sharing information and strategies is a key to “winning.” Teamwork is decisive.

Games are measurable and iChoose is flexible. iChoose gives players a clear path forward toward sustainability as well as clear cues about progress by assigning points for a variety sustainable actions based on the estimated savings and degree of difficulty of the action. In the end, a person can get some sense of how what they choose to do for their particular household matters to their bank balance and to the environment.

Games are rewarding. Individuals win prizes for all sorts of things in iChoose.  Top scorers receive prizes but anyone is eligible to win a prize just for playing. What we found, however, is the prize that’s most compelling for players is one designed to help the community. The winning iChoose team gets the chance to direct a Miron Sustainability Grant to the people, causes or organizations they choose.

Most importantly, games work. Since we began five months ago, 62% of Miron employees have taken at least one sustainable action and about a third of employees play during any given week of the game. At Miron, employees are enjoying themselves while they play. Says one iChoose participant,”I’m learning a lot and I am anxious to pass that onto my kids, my friends, anybody else who will listen to me.” Another player summed up their experience (and our goal) really well, “The game is important, but the bigger message that I am getting from this is that it’s about my life and how I can be more sustainable…I’m grateful for the game in opening my eyes.”

The real impact of iChoose is becoming apparent. Collectively, Miron employees are on track to reduce electricity use by 18% compared to typical households. That translates into savings of over $100,000 and 1.2 million pounds of greenhouse gas pollution. Those are very real, very big results; fitting for company invested in doing big thing for its employees, clients and community alike.