If you’ve been car shopping lately, you might have noticed the fuel economy window sticker looks a little different than before. The EPA recently began rolling out redesigned stickers for a number of different vehicle types – simply because car shoppers today are asking for information that’s simple, relevant and downloadable.

Looking at the new stickers, you might think, “Wow, there’s way more information on this one than the old one.” With the different vehicle types now available and the government’s regulation of vehicle emissions, consumers want—and need—to know more than how many miles per gallon they can expect to get. Here is a quick overview of what you’ll find on the new Fuel Economy and Environment labels for gasoline vehicles. 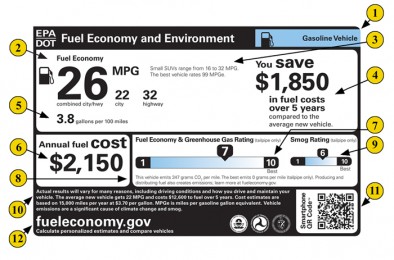 Fuel Economy (2, 3, 4 and 6) –The standard metric of miles per gallon (or miles per gallon of gasoline-equivalent for plug-in hybrid and electric vehicles) still appears on the new sticker. The only real change is that combined city/highway MPG is more prominent than before (because that’s what most of us want to know anyway). Annual fuel costs and estimated savings in fuel costs over five years are also provided.

Fuel Consumption (5) – Making its sticker debut is the fuel consumption metric, which most view as being a more accurate comparison tool of energy usage among different vehicles. Basically, it tells you how many gallons of gas or gas-equivalent the vehicle uses per 100 miles of driving. (The electric vehicle sticker uses kilowatt-hours per 100 miles.) This results in a more even metric that can be used to compare all vehicle types.

Fuel Emissions (7, 8 and 9) – Also new to the sticker is what I’ll call the environmental portion, which includes the fuel economy and greenhouse gas rating, smog rating and carbon dioxide emissions.  Every vehicle is assigned a rating on a scale of 1 (worst) to 10 (best) with regards to fuel economy and greenhouse gas emissions as well as smog.  While not all states have regulations regarding these metrics right now, it’s likely they will in the future. That being said, the new stickers have graphics depicting where your vehicle falls on these spectrums. They also provide the vehicle’s carbon dioxide emissions in grams per mile.

QR Code (11) – After all the fine print, you’ll find a QR code on the new stickers. Scanning the code with your smartphone will take you to helpful tools and additional information about the vehicle.

Image courtesy of the U.S. Department of Energy’s website: www.fueleconomy.gov