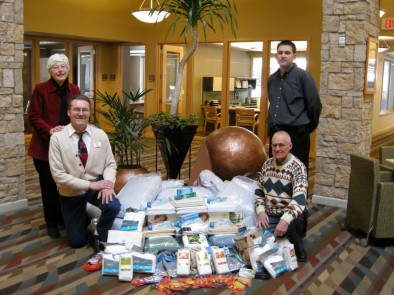 Neenah, Wis. – Miron Construction Co., Inc. recently donated more than $1,500 in supplies and gift cards to the Fox Valley Warming Shelter and presented the items to Brad Vivoda, Gary Crevier and Therese Janssen, representatives with the shelter, during a company-wide meeting on February 15, 2010.

Employees recently engaged in some friendly competition by participating in a scavenger hunt team building activity at the Fox River Mall. When the event was being developed, Miron contacted the Fox Valley Warming Shelter to ask them what type of supplies they could use. The items ended up being the objects the teams needed to purchase at part of the activity.

Nine teams, consisting of several people, solved puzzles to determine which stores they had to visit and what products they had to buy. The products included socks, toothpaste, pillows, coffee, blankets, sheets, hand warmers, hats and gloves, extension cords and Subway gift cards. Miron furnished each team with a gift card to make their purchases and any balances remaining on the cards were also donated to the shelter.

Last summer Miron was selected as the general contractor for the Fox Valley Warming Shelter’s new 6,500-square-foot facility, which will be located in Appleton on land to be leased behind St. Vincent de Paul’s store, located at 1924 W. College Avenue.