The Brown County Expo Center will serve as a true destination in Ashwaubenon’s growing entertainment district, bridging the new Titletown development with the Resch Center and the Legends District. The new facility promises to boost tourism in the area, attracting a wide variety of events such as concerts, festivals, shows, and meetings.

In an effort to bid farewell to the old and usher in the new, two notable events occurred this month: Demo Day and an official groundbreaking ceremony.

Tuesday, July 9, marked an important milestone for the redevelopment project, with exterior demolition on the Brown County Arena. The 60-year-old arena is being taken down piece-by-piece in order to make way for the new Expo Center. The project team is working diligently to prepare the interior and remove materials, carefully take down the exterior, and eventually remove the roof. The entire arena is slated to be down by the end of July. 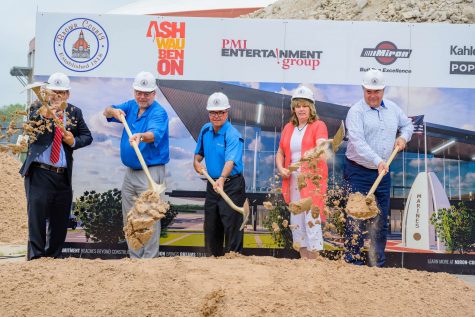 A ceremonial groundbreaking event took place on Wednesday, July 17. With representatives from Brown County, the Village of Ashwaubenon, PMI, Populous and Kahler Slater (the architects partnering on the project), Miron Construction, and other stakeholders, the first shovel turns took place, signifying the start of construction on the new Expo Center.

“[I’m] very excited to have the team that we do with Brown County and Ashwaubenon and PMI,” said Kurt Wolfgram, Miron Project Executive. “They have worked tirelessly to get us where we’re at and we’re off and running.”

This project consists of a new 125,000-square-foot exhibition hall, as well as pre-function space and storage/support space connected to the existing Resch Center Arena. In addition to new office space for PMI Entertainment, the facility will include large meeting/flex rooms and an outside party deck with a large expanded plaza area for outdoor events.

The Miron team is excited to be a part of this project, helping to bring this long-awaited dream to life!