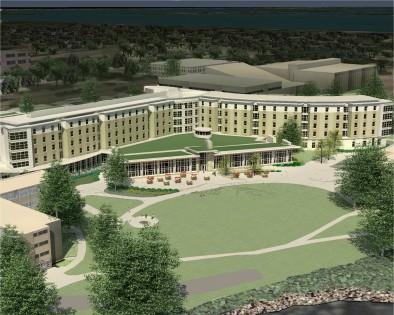 Starting in 2012, incoming UW-Madison freshman are likely to feel a little less homesick if they’re assigned to the new Lakeshore Residence Hall, now taking shape on the UW-Madison campus.  Miron is serving as general contractor for the $27.1 million project, which will not only include beds for 400 students (primarily freshman and sophomores), but serve as a community center for the more than 3,000 students who call the west end of campus home during the school year.

According to Andre Lorenzen, senior project manager for Miron, work on the Lakeshore Residence Hall is progressing quite well.

“Miron has a talented team working aggressively to get the concrete structure out of the ground,” he says. “This project is a great example of Miron’s educational construction abilities, since it not only incorporates a large dormitory but, when completed, will also include a food service facility that will serve over 1,300 meals a day.”

The project itself takes dormitory living to the next level as a welcome addition to the existing Lakeshore Residence Halls overlooking Lake Mendota. While floors two through five will hold the 204 two-bedroom units for students assigned to this dorm, the first floor will offer a variety of multi-purpose space, including a brand-new food service facility for the west-end student population; a marketplace with convenience stores; a satellite UW-Madison health clinic; and most importantly, a place to purchase Babcock ice cream.

The design itself incorporates a number of green and sustainable elements, such as a green roof and solar panels for heating water. During construction, Miron is also participating in a Construction Waste Recycling program tracked through WasteCap.

Miron’s work on the 228,639-square-foot project started in March, when work began with the concrete structure itself.

Occupancy on the project is expected next year, but the new UW-Madison Lakeshore Dormitory is likely to be a busy spot throughout the entire year. During the summers, the university plans to use the facility as a location for short-term camps and conferences, which will help the university expand its conference services aimed at adults.