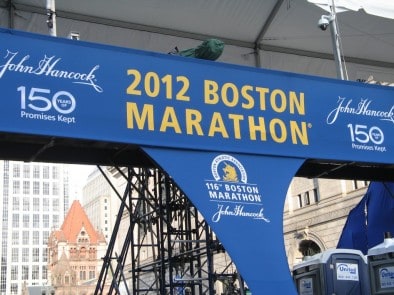 Brotherly bonding takes many forms. Some laugh over beers at a bar while others seek out the serenity of a favorite fishing hole. For Miron’s Steve Tyink, it was running the 2012 Boston Marathon with his brother, Scott. “My brother and I are close,” said Steve, “so we decided it would something fun we could do together.”

Not many people view pounding the pavement for 26.2 miles as  “fun,” but that’s what sets Steve apart. He’s an endless source of positivity around the office and can frequently be found on one of the treadmills in our Wellness Center. It turns out that both his positivity and commitment to hard work would come in handy as he prepared himself for the race with a workout program that included running up to 50 miles per week and regular sprints around the office from one meeting to the next.

Steve admits that talk of unseasonably hot temperatures for race day, being asked if he would like to defer to the 2013 race and receiving warnings from medical professionals to slow down his pace added to the intimidation of an already challenging race. Still, on the morning of April 16, he pulled on a new pair of socks (a race day ritual), laced up his running shoes and starting running anyway.

Energized by a playlist of rock anthems including Led Zeppelin’s “Kashmir” and U2’s “Beautiful Day,” Steve finished the marathon in 4:11:39. It wasn’t exactly what he was aiming for, but being able to share the overall experience with his family was more than enough. “As you get older, it’s important to stay connected with the people who mean the most to you,” he said. “I work hard to find experiences that keep my family close.”

So, is this an experience he plans to repeat? “No, once per lifetime is enough for me.” While a 2nd Boston Marathon isn’t in Steve’s future, we’re willing to bet it won’t be long before he’s having fun running another race. That’s just the kind of person he is.