David G. Voss, Jr., Miron’s President and CEO, was recently honored with the Wes Urch Volunteer Service Award by United Way Fox Cities. This is the organization’s most prestigious award and is given annually to volunteers who have demonstrated dedication and commitment to building a better community through their work with United Way Fox Cities. The award is named in honor of Wes Urch, who was the face of United Way of Neenah-Menasha for twenty years, leading the organization through tremendous growth and change. He retired in 1988, but remained a very active community volunteer. Throughout the history of the award, starting in 1993, 52 volunteers have been honored as Wes Urch Volunteer Service Award recipients.

David G. Voss, Jr. became deeply involved with United Way Fox Cities when he jumped in to serve as a Campaign Co-Chair in 2016 and 2017. In the role of Campaign Co-Chair, he co-led the community fundraising efforts for two successful campaigns, reaching $8.6 million in 2016 and $8.9 million in 2017. Voss agreed to spend the next two years, chairing Leadership Giving (donors who give $1,000 or more annually) and Tocqueville (donors who give $10,000 or more annually), and making the major asks of donors on behalf of United Way Fox Cities. He continued to serve as chair for these groups with incredible dedication, two years past his original term, until 2021 to provide the organization’s fundraising efforts with stability through the COVID-19 pandemic.

“When I hear Dave advocate for United Way, I get reinvigorated about our work. He speaks about giving back to the community with a genuine, inspiring passion in his voice that can be felt,” said Josh Kilgas, Vice President of Resource Development, United Way Fox Cities. “We are so grateful for his leadership.” 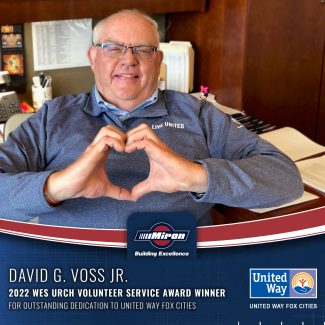