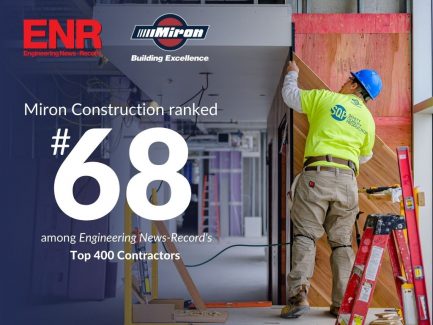 Neenah, Wis. (June 25, 2021) — Engineering News-Record (ENR) recently published its list of the Top 400 Contractors in the nation. This year, Miron Construction Co., Inc. ranked number 68 on the list, making a considerable 17-spot leap from last year. Miron remains the only Wisconsin-based building contractor to break the top 100 on the national list, recording $1.3B in revenue in 2020.

“We are thrilled to see such a large jump in our Top 400 ranking,” said David G. Voss Jr., president and CEO of Miron. “Despite any challenges that occurred due to the pandemic, our team of 1,500+ remained committed to doing great work and dedicated to building excellence for our clients. While we are extremely honored to be ranked amongst the top contractors in the country, it’s never been about a number. Our goal remains—to be the best in the industry.”

The list ranks the top 400 general contractors in the United States, both publicly and privately held, based on gross revenue from the previous year derived from general contracting, construction management at-risk, the construction portion of design-build activities and equipment procurement, and installation services as part of an overall construction contract.