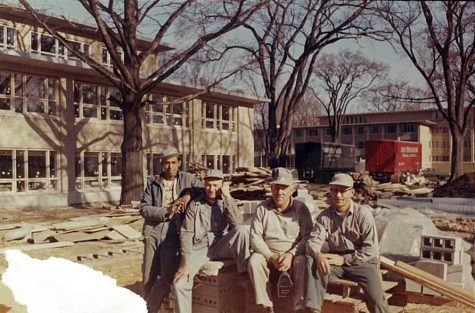 It was 1918. Woodrow Wilson was President. The Boston Red Sox brought home a World Series win, beating the Chicago Cubs four games to two. Standard time zones were officially established, and daylight savings time went into effect in the United States in an effort to conserve fuel during the war. And Canadian immigrant P.G. Miron founded what is known today as Miron Construction Co., Inc.

A century has passed since our company’s inception, and countless advancements have been made in technology, building materials, and the construction industry itself. These strides merit a look at how the world of construction has changed during the last 100 years.

Construction dates back to the earliest human activities. It served a functional need, as people built dwellings to protect themselves from the elements. As lifestyles changed, construction evolved in tandem. Advancing thousands of years, past primitive Stone Age buildings, the Renaissance, and the Industrial Age, we arrive at the beginning of the 20th century.

Following two waves of the Industrial Age, when iron, steam, steel, and electricity transformed building technology, there was a boom in steel-framed, high-rise buildings. This was particularly true in cities such as Chicago, where a rapidly growing business district and high land values meant building up rather than out. Over the next three decades, notable steel-frame buildings such as the Woolworth Building (1913) and the Empire State Building (1931) were constructed. A renewed interest in high-rise construction arose after WWII, as the industry benefited from declining energy costs.

Shell construction in concrete began in the 1920s. An early example is a planetarium in Germany that was built with a very thin, hemispherical shell. Various types were adapted to be used in industrial buildings. This type of construction became common after WWII, and developed rapidly in the 1950s.

A number of innovations in both materials and building processes occurred in the late 19th century and into the 20th century.

Though developed in the late 1800s, electric arc welding was widely applied to building construction during this time. The first all-welded, multi-story buildings were a series of factories for the Westinghouse Company, beginning in 1920.

During the second industrial revolution, the use of concrete reemerged due to the creation of high-strength artificial cements. Precast concrete blocks were manufactured, but didn’t compete with brick until the 20th century. Reinforced concrete was also invented during this time. The early seeds of development began with a French gardener and his 1867 patent for large concrete flowerpots reinforced with a cage of iron wires.

High-rise concrete structures were built, such as the 16-story Ingalls Building in Cincinnati (1903), however they had much lower strength in comparison with steel. Between 1900 and 1910, the elastic theory of structures was applied to reinforced concrete. After much testing, it was determined that deformed bars made for good bonding with concrete. The slow elastic failure of steel balanced out the abrupt failure of concrete if overloaded.

In the 1920s, pretensioning represented a major contribution to concrete technology. Reinforced wires were stretched in tension and concrete was poured around them. When the concrete hardened, the wires were released. This pretensioning ensured that when a load was applied, the concrete member deflected downward and remained in compression, avoiding tension cracks. The use of this technology became widespread after 1945.

Many other advancements occurred over the years concerning high-rise construction, including the use of shear walls (to counter the effects of a lateral load acting on the structure), and slipforming (where concrete is poured into a continuously moving form).

Clear plate glass had been in production since the 19th century, but by 1905, sheet glass was made as a more affordable alternative. The Pilkington Brothers developed the float glass process in 1952, which became a standard method of production. Demand grew in the 1950s for tinted glass that absorbed and reduced solar gain. Reflective glass was manufactured in the 1960s to achieve the same goal. Heat-mirror glass was developed in 1984; combined with double-glazing, the insulating value of the glass nearly matched that of a wall.

Perhaps some of the most significant developments made within the industry over the last 100 years relate to safety. The first step toward safety legislation occurred toward the end of the 19th century, which laid the groundwork for safety regulation on the part of the Federal government. Unsafe working conditions for railroad workers led to the passage of the Interstate Commerce Act and the creation of the Interstate Commerce Commission in 1887, which attempted to regulate the railroad industry. To further hold railroad companies responsible for safety, the Federal Employers Liability Act was enacted in 1908 to protect and compensate railroad workers injured on the job.

By 1915, the Building Officials and Code Administration was established to provide knowledge about building safety and construction regulation, thus making building codes more consistent. The following year, Travelers Insurance Company published Safety in Building Construction, a comprehensive publication that was widely accepted as the industry standard of the time.

In 1938, the Fair Labor Standards Act set a minimum wage and banned child labor. Additional safety legislation did not pass until 31 years later, when the Construction Safety Act of 1969 required the Secretary of Labor to seek advice of the Advisory Committee on Construction Safety and Health in determining construction standards.

Today, safety is as integral to the construction process as equipment and building materials. Over the past 48 years, OSHA, state partners, unions, and safety and health professionals have greatly impacted workplace safety. According to OSHA, worker injuries and illnesses are down from 10.9 incidents per 100 workers in 1972 to 2.9 per 100 in 2016.

In some ways, the dust has settled on innovation within the industry. Steel, concrete, and lumber are standard materials when it comes to building, and haven’t changed much over the years. Where innovation is currently moving the industry forward is technology such as Virtual Construction, Building Information Modeling and Virtual Process Integration. Only time will tell what is in store for the construction industry in the next 100 years.