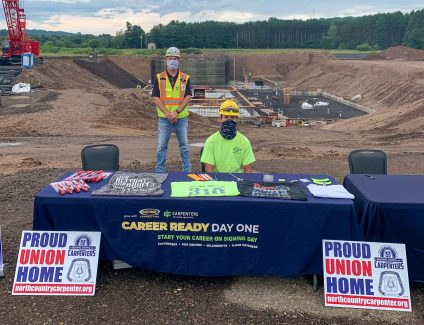 It’s not unusual for a son to follow in his father’s footsteps when it comes a chosen occupation, but not many duos end up employed by the same company altogether.  But such is the case for Dan and Kobe Rector, who are now connected by not just one family but two – the second being that of Miron Construction Co., Inc.  Kobe recently signed his apprenticeship papers to join Miron – the same company for which his father Dan has worked for over twenty years.

Dan’s career, fueled largely by encouragement from his friends in the trades as well as his love of the outdoors, began in road construction in 1999.  When the weather turned cold that year, the local contractor laid him off, which led him to Miron, where he began his tenure as a laborer.  (It didn’t hurt that Dan hails from Mattoon, an area in northern Wisconsin known for providing a plethora of skilled tradespeople to Miron.)  Dan quickly climbed the ranks, getting promoted to laborer foreman, carpenter apprentice and carpenter foreman before working his way into his current position of civil superintendent, a post he has now held for the past six years.

It was during those years of professional growth that Dan also became a father, and began to share his love of construction with his son.  Whenever the opportunity arose, Dan would bring Kobe to the job site to show him around, and just like his father, Kobe immediately took interest in the trades.  It wasn’t long before he was helping his dad out with projects around the house, and began honing his carpentry skills through courses in school.

Although his drive-through commencement ceremony from Antigo High School this past May was far from anything Kobe had imagined, he has kept his eyes to the future, with ambitions of someday becoming a superintendent and running his own jobs, just like his dad.  In the meantime, he will learn to savor the joys of construction: the satisfaction of working through the complexity and intricacies of each job; the fulfillment of overcoming the trials and tribulations each projects presents – challenges like working against tight structures and tight schedules; the gratification of observing each day’s progress, watching the pieces of the puzzle come together; the pride of creating something out of nothing, bringing structures to life from the ground up; the responsibility of ensuring he and his fellow colleagues go home safely each night; and the bonus reward of gaining many new hunting and fishing partners within the greater Miron family. All of these things he will come to know through Miron, just like his dad.