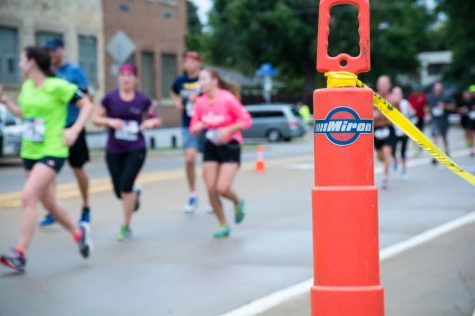 We’re less than a month away from the Community First Fox Cities Marathon (presented by Miron Construction) weekend of events! We take our sponsorship seriously, so this September 18-20, members of the Miron team will be participating in this community-wide event by volunteering, cheering on runners and even participating in events themselves! This includes running with myTeam Triumph, an organization that pairs athletes with disabilities (Captains) with able-bodied athletes (called Angels) to participate in endurance events like marathons and triathlons.

Miron teamed up with myTeam Triumph to custom-make a racing chair that will allow for the most efficient movement possible for Captains and Angels alike. Two teams will use this chair during the Marathon weekend of events: one during the Affinity Medical Group Orthopedics & Sports Medicine 5K Run/Walk on Saturday and one during Sunday’s ThedaCare Half Marathon.

As an organization committed to bringing out the best of the community in which we live, work, and play, Miron is proud to partner with an organization as inspirational as myTeam Triumph. Congratulations to the 5K team of Ashley Rothmann, Dean Basten, Dawn Floriano and Cassie Rucks and to the Half Marathon team made up of Lindsey DeWitt, Dorinda Corbett, Matthew Daniels, Aaron Crass and Kyle Pieters. You’re all already first-place winners in Miron’s eyes!