Neenah, Wis. – Due to its many sustainable features, Miron Construction’s Lake Mills Middle School project will be highlighted in a Green Schools exhibition at the National Building Museum in Washington, D.C.

Lake Mills Middle School is no stranger to being acknowledged as the best of the best among green schools. The Center for Green Schools and United States Green Building Council (USGBC) named the Middle School to its 2011 Best of Green Schools’ list, the Associated General Contractors (AGC) of Wisconsin selected the project to receive a 2011 BUILD Wisconsin award, the school ranks highest in points earned under the LEED for Schools green building rating system in Wisconsin, was the first public K-12 school in the nation to be awarded LEED Platinum certification, and was named the 2011 World’s Greenest School by The Center for Green Schools and USGBC.

The Green Schools exhibition will focus specifically on Lake Mills’ geothermal heating and cooling system, which contributes to making the school 45 percent more efficient than a conventional school, yielding a total annual energy savings of more than $85,000.

“We’re thrilled to be included in the National Building Museum’s Green Schools exhibition,” stated Dean Sanders, Lake Mills’ district administrator. “The school board is very proud to give the community, and future generations, a high-quality building that focuses on the health and safety of their children, minimizes annual operating and maintenance expenses, which minimizes the financial burden of taxpayers, and reduces environmental impacts.”

More than 60 million Americans spend their days in K-12 school buildings, so it is vital these structures are healthy built environments. The Green Schools exhibition, opening March 3rd, will highlight schools throughout the nation that are ensuring students, faculty and staff have daily access to clean air, healthy food and natural light. 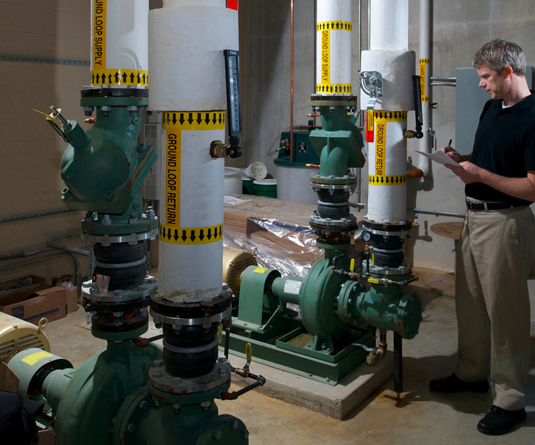 Miron Construction Co., Inc., named 2012 Contractor of the Year by ENR Midwest, is a forward-thinking, fast-growing private company completing work throughout the nation. Miron is currently listed 115th among all general contractors in the United States and among the top 10 construction companies serving the Midwest by Engineering News Record (based on revenue figures for 2011). Miron provides innovative pre-construction, construction management, design-build and general construction services and is headquartered in Neenah, Wis., with regional offices in Madison, Wausau and Milwaukee, Wis., Cedar Rapids, Iowa, Negaunee, Mich., and Virginia, Minn. Miron is also the Official Provider of Construction Services for the Green Bay Packers and Lambeau Field.