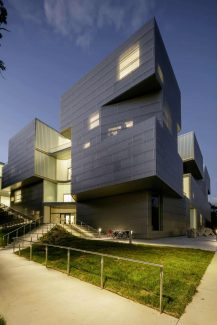 The new five-story facility for the University of Iowa’s School of Art and Art History is designed around a central atrium and brings together a diverse array of traditional art disciplines like ceramics, printmaking, sculpture, painting and drawing with more digitally-minded photography, 3D design, graphic design, and video art. It also includes graduate student studios, faculty and staff studios and offices, and gallery space.

“As the general contractor on this project, Miron Construction is beyond proud to see the University of Iowa Visual Arts Building honored yet again,” said Jonathan Daniels, vice president, Iowa operations for Miron. “The ACI honors only the best of the best with its Excellence in Concrete Construction Awards, and we’re privileged to be ranked amongst some of the most creative and visually stunning concrete buildings around the globe.”

Concrete was the major building material utilized on the project and was used to create floors, walls, and ceilings. All formed concrete was exposed and either painted or polished. The center atrium of the space was sculpted with concrete handrails and winding stairs.